A true hero for the planet 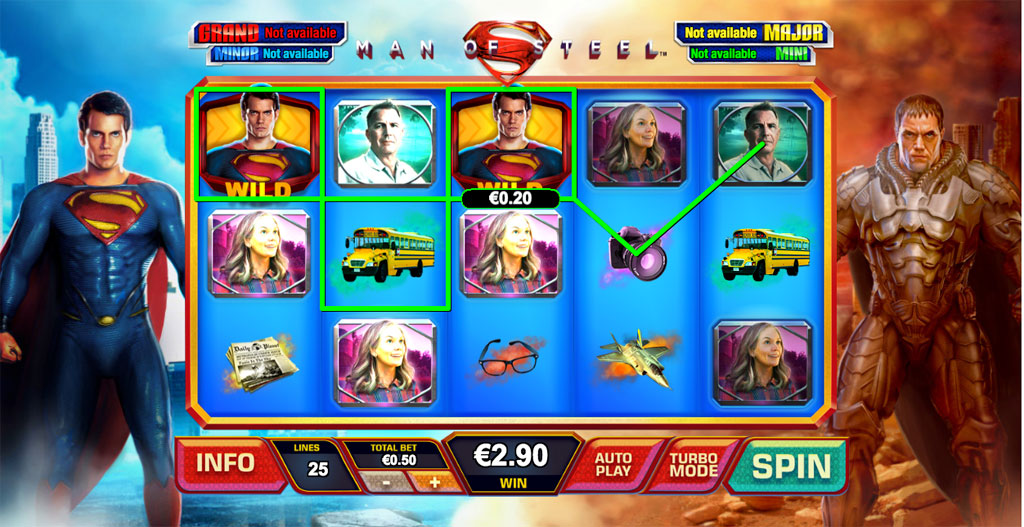 There are 4 bonus features – you will see shifting wilds and the World Engine Bonus feature where you will get 1 spin with up to 7 regular wilds. The second is called “The Battle for Earth – Free Games” feature, here Superman takes on General Zod and his warriors creating extra wilds on the reels. Third is “The Krypton Free Games” feature which gives you up to 14 free spins with up to 10 Jor-El sticky wilds on the reels. Finally, there are 4 randomly triggered progressive jackpots to be won!

It can also be played on desktop, mobile or tablet.

The symbols include Superman and he is the expected wild symbol. There are also five other wild symbols and that is General Zod, Faora, Namek, Jor-el and regular wild. Your job will be to get five of these on a payline that would give you a payout of 1000 coins.

The coolest feature to look out for is Superman vs General Zod shifting wilds. If both General Zod and Superman Wild appear in the base game then you are on! You will get free spins as the Superman Wild moves to the right while General Zod move in the opposite direction, battling. You will be waiting for them to land on the same row so that the Battle for Earth is triggered. This means a war between Superman and General Zod. Superman will be able to recruit other members to his crew while sliding over the reels such as Namek and Faora. Whenever Superman is defeated the free spins are over and the best part of the game stops.

Now the Man of Steel slot has additional features including Krypton free spins, where the stones will weaken Superman. There are also four progressive Jackpots meaning more possible wins and these are of course the big one. The Grand Jackpot.

It is an excellent video slot with amazing graphics. Add in the sound effects and moving pictures while winning awesome bonuses, and you have all the ingredients of a great game. The payout is also good and bonuses appear more often than many other slots. This is truly a slot that every online slot lover should try out at least once