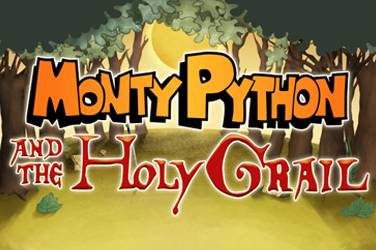 The graphics are based on the iconic and controversial film, it has cartoon style graphics and is set on a battlefield – the soundtrack is superb and reminiscent of the film. Symbols on the reels include medieval style A, K, Q and J playing cards as well as characters from the film – you have Patsy, Sir Robin, Sir Bedevere, Sir Galahad, Sir Lancelot and King Arthur. The latter is the most lucrative symbol giving you 1,000 coins for 5 across a payline.

There is a Monty Python Holy Grail wild symbol which gives you 150, 600 or 5,000 coins for 3, 4 or 5 on the reels – the wild can appear anywhere and replaces all other symbols bar the scatters. There is also a Holy Grail symbol which is another wild and only appears on reel 5 – 3, 4 or 5 on the reels will reward you with 150, 600 or 5,000 coins. When the wild lands, it moves over the reels and can leave new wild symbols on any symbol it touches.

The other important symbol is the coats of arms shield scatter which appears only on reels 1, 3 and 5 – when it appears on these 3 reels simultaneously, you will trigger the Quest of Camelot Free Games feature. You then need to pick shields to play 1 of 3 free games modes. Every shield you pick gives you a number of free spins with a modifier – once you fill a collection area, you will play the relevant free games feature with the collected modifiers.