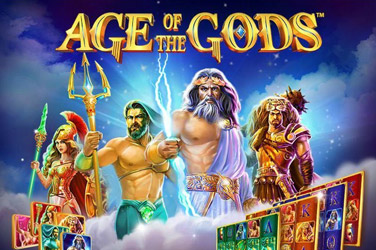 Brand new from Playtech is this action-packed online slot themed on the deities of Ancient Greece; it’s called Age Of The Gods it comes with a variety of bonus features and a progressive jackpot.

Age Of The Gods is a five reel slot with three reels and twenty fixed paylines; those gold-rimmed reels float against a backdrop containing the palaces of the gods with water cascading into through columns into a large lake.

 The higher value symbols are mainly Greek gods including Zeus, Poseidon, Ares, Athena among others; Achilles helmet also makes an appearance and then Q, K and A make up the lower values.

Free Spins
Trigger this by landing three or more of the Age Of The Gods scatter symbols anywhere in view; this kicks of the free spins round and first you must pick from the grid of gold coins on display to find three which match. This determines which of the four free games variations you get to play although if you pick three Hades the round ends there.

When the round is finished you are taken back to the coin screen for another chance at some more free spins.

Age Of The Gods is well worth checking out.